This is a complete, up-to-date list of all Putnam Valley homes for sale.  Click each listing for additional information including School and Mortgage info.

A Little About Putnam Valley

My husband and I have lived in Putnam Valley since 1994. We’ve enjoyed living here and recommend it highly. It’s a beautiful town filled with history and great people looking for a quiet place to enjoy nature. But it’s only 1 hour from Manhattan. The Taconic Parkway runs right through giving easy access to Albany in the North and New York City in the South. Don’t let the distance fool you, the commute to NY is better than you think. 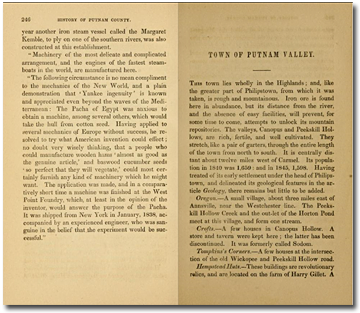 William Blake, Esq. wrote about the history of Putnam Valley in 1849. It’s worth a quick read. You can find the whole book online at https://archive.org/details/ historyofputnamc00bla. I’ve included a brief text from it below because it really gives the color of the area at the time. Putnam Valley hasn’t changed all that much. It’s retained the charm of earlier days, something I particularly appreciate.

This town lies wholly in the Highlands; and, like the greater part of Philipstown, from which it was taken, is rough and mountainous. 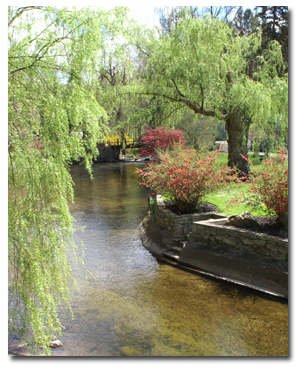 Iron ore is found here in abundance, but its distance from the river, and the absence of easy facilities, will prevent, for some time to come, attempts to unlock its mountain repositories. The valleys, Canopus and Peekskill Hollows, are rich, fertile, and well cultivated. They stretch, like a pair of garters, through the entire length of the town from north to south. It is centrally distant about twelve miles west of Carmel. Its population in 1840 was 1,659: and in 1845, 1,598. Having treated of its early settlement under the head of Philipstown, and delineated its geological features in the article Geology, there remains but little to be added.

Oregon.— A small village, about three miles east of Annsville, near the Westchester line. The Peekskill Hollow Creek and the out-let of the Horton Pond meet at this village, and form one stream.

Crofts.— A few houses in Canopus Hollow. A store and tavern were kept here; the latter has been discontinued. It was formerly called Sodom.

Tompkins’s Corners.— A few houses at the intersection of the old Wickopee and Peekskill Hollow road.

Hempstead Huts.— These buildings are revolutionary relics, and are located on the farm of Harry Gillet. A detachment of the troops of the Massachusetts Line, with a company or two from Hempstead, Long Island, occupied them in the winter of 1780; which accounts for the name. The chimneys still remain, but the huts have been burnt down.

Canopus Hull.— An eminence in the south-west part of the town, on the farm of Meeks, Esq. It is named in honor of an Indian Chief.

Tinker Hill.— T his hill is about three miles northeast of Canopus Hill, and is owned, partly, by John Odle, Esq. About fifty years ago an old Englishman lived on it, named Cornelius Rick, who went about tinkering, or doing a little at every trade; and hence the name.

There are nine ponds in this town, some of them of more than ordinary size. The largest is the
Horton Pond.— It is located in the centre of the town, and contains excellent Bass and Pickerel, some of the latter weighing six and seven pounds. It is bounded by the lands of Lee Horton, Abijah Lee, Charity Smith, Wesley Christian. Solomon Baxter, Daniel Barger, Joseph Strang, and Henry Mead; and is about 1 & 3/4 of a mile in length and 1 in breadth. It is named after the Horton family who formerly owned all the land adjacent to it.

Solpeu Pond.— This pond lies in the west part of the town, about one mile from the Horton Pond; and was named after a person of that name who lived in its vicinity. It is about a mile in length, and half a mile in breadth. Like the Horton Pond, it contains excellent Bass and Pickerel. It is circumscribed by the lands of Mrs. Ann Horton, William Jerry, James Like]y, and William Denny.

Barger’s Pond.— This sheet of water is in the south-east part of the town, about three-fourths of a mile in length, and one-fourth in breadth. It takes its name from the Barger family, who have long resided in the neighborhood of the pond.

Bryant’s Pond.— This pond is next in size; and is situated in the east part of the town, about threefourths of a mile north of Barger’s Pond. It is half a mile in length, nearly that distance in breadth, and is named after Solomon Bryant.

Muddy Pond.— This body of water lies about half a mile north of the Horton Pond, is nearly half a mile in length and one-fourth in breadth, and is called from the muddy appearance of its water.

Clear Pond.— This beautiful sheet of water does not belie its name; for a more pellucid body of water is not found in Putnam County, or in any other. It is in the north part of the town, has no inlet, is formed by springs, and clear as crystal. It is about half a mile long, nearly that distance in width; runs south into the Muddy Pond, which empties into the Horton Pond, which, in turn, empties into the Creek at Annsville, just south of the Putnam and Westchester line. Those who live near it, and are familiar with its water, assert, that a person can see twenty feet, or more, into it.

Jonathan Owen’s Pond.— A handsome sheet of water about half a mile long and one-fourth of a mile broad, in the most southern part of the town, and nearly one-fourth of a mile from the Westchester line. It runs into the creek at Annsville above-mentioned. The name explains itself.

Cranberry Pond.— This is the smallest pond in this town, and is situated about half a mile north of Owen’s Pond. It is about one-fourth of a mile in length and forty rods in breadth; and located on the land formerly owned by Philemon Smith. Immense quantities of Cranberries grow upon the low grounds skirting it, and hence the name. Cran is saxon; and berry is derived from the Saxon word beria. Compounded, it means a berry that grows on a slender, bending stalk; also called moss-berry, or moor-berry, as it grows only on peat-bogs or swampy land.

Pelton’s Pond.— A small body of water lying north of the Clear Pond, located in the north part of the town, one-fourth of a mile long and about one-eighth in breadth. It takes its name from a man who worked an ore-bed near it, and empties into the stream running to Annsville. 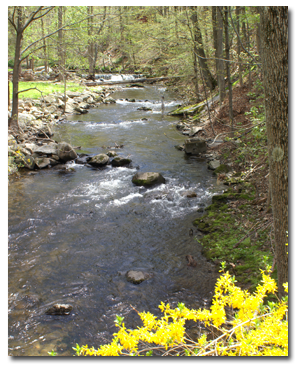 A small stream rising from a spring just south of Stiliman Boyd’s, in the town of Kent, running the entire length of the Hollow, and falling into the outlet of the Horton Pond. On this stream are the following mills, viz.: Herman Adams’s saw mill; John Post’s saw and grist mill; Pratt’s trip-hammer, turning-lathe, and whip-saw works; Thomas Winter’s grist mill, and John Sillick’s saw mill; and the wire factory belonging to Joseph Strang & Co.

Canopus Hollow Creek.— This stream rises near the second Gate on the Cold Spring turnpike, runs through the Sunk Lot, and falls into the stream at Annsville, near Peekskill, Westchester County. On it are Bunnell’s Forge and saw mill; a saw mill formerly owned by John Horton, and Mowyat’s paper mill.

Other great sites in Putnam Valley are Fahnstock State Park, Lake Oscawana - a great motorboat lake, Roaring Brook Lake - An absolutely beautiful non-motorboat lake and so so clean, and lots of other lovely spots.